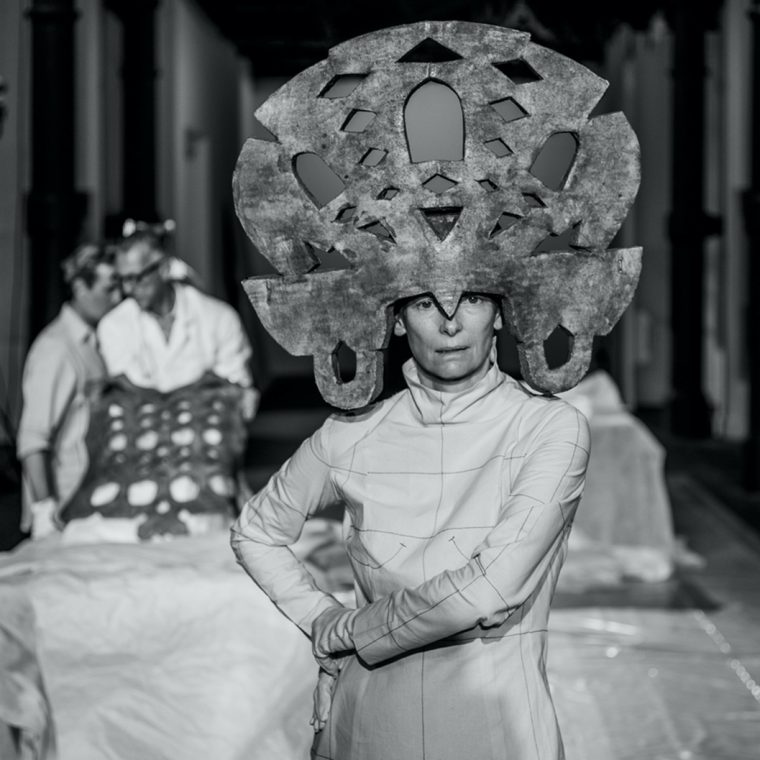 A performance presented as an exhibition in progress at an artist’s atelier, where actions take shape around the costumes, which are none other than an alter ego of the body wearing them.

This is how Olivier Saillard – a recognized fashion historian, the former director of the Galliera Museum in Paris, and world-renowned fashion curator – and Tilda Swinton – an icon of international cinema, awarded with the Golden Lion for Lifetime Achievement in 2020 – have envisioned Embodying Pasolini. The world premie, an event part of the ROMAISON program, took place in Rome on June 25, 2021, at the Pelanda and the Mattatoio exhibition pavilion.

Approximately forty costumes designed by Danilo Donati for Pier Paolo Pasolini’s films, created and still safeguarded today at Sartoria Farani, and a selection of wooden hat blocks from the Pieroni Laboratory, used to create the hats worn in Pasolini’s films – the hat blocks’ presence lends a mysterious character to the atelier’s space – are the ideal starting point from which Embodying Pasolini was born and developed in the dramaturgy created by Saillard and Swinton.

Embodying Pasolini is part of Rome’s ROMAISON festival, a project dedicated to exploring the relationship between costume and fashion.

From The Gospel According to Matthew, to The Hawks and the Sparrows, Oedipus Rex, Porcile, The Decameron, The Canterbury Tales, Arabian Nights, to Salò or the 120 days of Sodom, the costumes – garments, coats, as fragile creations of intertwined and dyed threads – recreate a cinematography “emptied” of the actors’ bodies, in which the performative action took place. Almost as if they were prisoners of a statuary state, reduced to silence – some never even seen again after shooting – the costumes become the subject and object of an evocative practice, they traverse the duration of the performance, in which the public was also invited to intervene.

It was Tilda Swinton trying on the above mentioned costumes, testing their consistency and memory by giving them a body. Not by recreating the role to which they were assigned, but by exploring the lack, the absence, and suggesting the contrast between power and action. “It is up to her,” writes Olivier Saillard, “to conjure from a sleeve’s holes and gaps what a dialogue, an exchange between actors or a scene consisted in.”

Embodying Pasolini was promoted by Roma Capitale, organized by Zétema Progetto Cultura with the collaboration of Azienda Speciale PalaExpo and produced by StudiOlivierSaillard with Aymar Crosnier’s coordination. Artistic collaboration by Gaël Mamine.